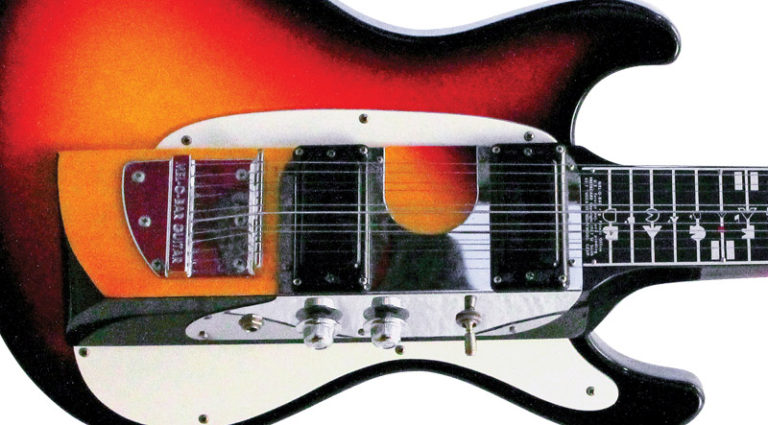 Born in Northern California in 1920, Walt Smith took piano lessons and became a multi-instrument prodigy before developing a love for big band music and western swing. Pursuing his dream of becoming a cowboy musician, he focused on guitar and lap steel.

Walt rebelled against his father’s plans to pursue a career in business and chose an agrarian lifestyle. In 1939, he and his new bride moved to a ranch in Arizona to plant cotton. He would eventually return to California and settle near Ojai to run a large ranch.

In the mid ’50s, Smith, a die-hard inventor, began developing an idea for a steel guitar that could be played comfortably standing up. He exchanged ideas with builders in the area like Leo Fender and the Dopyera brothers Ed and Rudy. By the mid ’60s, Smith’s idea had evolved into some experimental instruments he dubbed the Mel-O-Chord, which then evolved into the Mel-O-Bar.

The melobar (its common name today) was an odd-looking solid-body instrument and resembled a Spanish-style electric instrument, but its neck was set at about a 45-degree angle to the body. Smith hired Mosrite, a luthier in Bakersfield, to manufacture his innovative instrument.

“Dad wanted real quality, and that’s what Mosrite represented,” recalls John Selby Smith, one of Walt’s five sons. “It also had to do with wanting top pickups.”

The agreement gave Mosrite manufacturers the option of using basswood bodies, which Semie Moseley had rejected for the Ventures II model in 1965. However, the Melobar’s angled neck (usually 10-string) had to be installed differently, so Mosrite made a block of wood to close the neck joint cavity. On May 2, 1966, Smith filed a patent for his instrument, and it is probably no coincidence that the form’s line drawing showed a body silhouette resembling a Mosrite guitar.

In the summer of 1967, John Selby Smith, then a student in Princeton, visited San Francisco and Los Angeles. A melobar was included.
“I was sent to San Francisco by the head of the office [Princeton’s] psychedelic research institute to report on what’s happening in Haight-Ashbury,” he said of the neighborhood that was the birthplace of the hippie movement at the time. “After a crazy three weeks, I hitchhiked to LA and got hooked up through friends to show the Melobar rock bands – Jefferson Airplane for a week, the Mamas and the Papas, the Grateful Dead for a few days…there were a few others.”

The Airplane recorded its third album, After bathing at Baxterat RCA’s Hollywood studio.

“We showed up with the guitar and they were very nice. We spent the day there while they were recording and I taught Jorma (Kaukonen, lead guitarist) melobar licks during the breaks. He invited us back for the next two days. It was an amazing time because they were experimenting with music like I had never heard before. You hear the melobar here and there when there are slides or weird glissando licks.”

Several Melobar leads can also be heard on The Airplane’s fourth album, 1968 crown of creation.

“The credits on this album list the melobar as ‘chicken guitar,'” noted Walt Smith’s youngest son, Ted. “Dad was Not happy about.”

A curious “advocacy” for Melobar arose during John Selby’s LA stint. As he walked through a residential area of ​​Beverly Hills, he saw a distressed woman rushing out of her home. It was Shirley Boone, wife of crooner/actor Pat Boone, whose dog was having puppies and she didn’t know what to do. John assisted in the delivery, and his midwife struck up a friendship with the Boone family. A few years later, Pat was working on an endorsement project for the Melobar company.

Brian Jones of the Rolling Stones reportedly experimented with a melobar, and legend has it that shortly before his death Jones gave it to Jimmy Page, who played with the Yardbirds. Years later, Page called Walt Smith’s home late one night and asked for playing tips. He woke Smith from a deep sleep and Smith referred Page to Ted, who later informed Page that his Melobar was made by Mosrite.

After trying to popularize the new instrument in San Francisco and Los Angeles, John Selby was forced by his father to work at the Mosrite factory.

“Dad sent me to Bakersfield to oversee things,” he said. “By that point, I already felt very much part of Melobar.”

More than 50 years later, John Selby still has vivid memories of the Mosrite factory and its employees, including how his initial concerns were allayed.

“At first I felt like everything was out of control and mismanaged,” he recalls. “Decisions were made differently than what I was used to, but their logic worked. The staff had a relaxed, fun, irreverent and masterful attitude at the same time.

“I reported to Dad that the situation is working well – excellent precision and quality control. Almost all of the people who worked on our project sat in a corner of a large factory, and most were women. I remember them speaking with a heavy Okie accent which I grew up with. I would slip back into that accent with them, and that’s when I started singing with the Okie accent. I also realized that I had picked up a prejudice against that accent and quickly ditched it because these women were really good at their jobs! They greeted me with humor, played puns with me, laughed, etc a lot of, teaching me how to grow up. I loved being there.”

Although Walt Smith had insisted that Melobars be made of alder, the Ventures II’s leftover basswood bodies were used for most, if not all, instead. Their scale length was 23″, neck angles varied slightly from one instrument to another, and they were usually finished with the same tricolor sunburst popular on Mosrite instruments, although others were applied.

Walt Smith’s patent for the Melobar was granted on February 11, 1969, three days before financial troubles shut down the Mosrite factory. An estimated 300 were made.

In 1947, Morris Rosenberg and Ben Sacco started a company to make sacks for farmhands. In 1959, the Bakersfield-based Sierra Bag Company expanded to form Sierra Iron and Metal, a salvaged metal recycling plant. In the mid ’60s, noticing the rise of the music and guitar market, Rosenberg and Sacco formed Rosac Electronics & Manufacturing to make amps and effects. Among their new hires was former Mosrite Electronics Supervisor Ed Sanner (VG, Mar ’14) who, along with other former Mosrite employees, had been working in the black light at Rosac before the factory closed. Sanner designed the Nu fuzzan improvement over his Mosrite Fuzzrite, as well as the Distortion Blender.

Rosac was making melobars almost from the start, and at the very time his version was introduced, Pat Boone was recording the intro for an instructional recording that accompanies each instrument.

Rosac melobars were made of alder and had a different silhouette, with stubby, truncated horns that flared outward. The neck was mounted at 45 degrees and the scale length was 223/4″. They used cheaper tuners, and pickups were made by Paul Barth, who had worked for Magnatone and held one of the first guitar pickup patents. Again, the most popular color was a light tricolor sunburst.

In late 1970, Walt Smith “pulled the plug” (to quote Ted) at Melobar; Tired of the LA lifestyle, he moved to Idaho. First, however, he built a melobar with a pickup and a purple finish and gave it to his Ojai neighbor, singer Sheb Wooley (of “Purple People Eater” fame).

Rosac’s Melobar production also included about 300 instruments. When the factory closed, John Selby purchased six Melobars and converted them to a six-string “blues” configuration. He removed the sunburst and painted three white, three red. A white ended up with Poco’s Rusty Young, who nicknamed him “The Bear” and used him extensively in concerts.

In the 70’s Melobar produced an acoustic version for beginners. In 1980, the Smith family committed to a new lineup that included models with bodies like Gibson’s Flying V and Explorer built in Weister, Idaho. Rolling Stones guitarist Ron Wood had one custom-painted by North Carolina artist Wayne Jarrett.

In the late ’80s, the company became known as the Smith Family Music and moved to Sweet, Idaho, where it converted a barn into a furniture workshop, where it also made other styles of Melobar, including doublenecks, lap steels, and resonators. Walt Smith died in 1990 leaving a legacy of 600 instruments that would appeal to collectors who appreciate the esoteric, but over the following years Melobar achieved its greatest success, selling more than 2,000 instruments (one featured in the Brooks and Dunns “Boot Scootin’ Boogie”). In 1997 they offered an anniversary Mosrite Melobar in honor of Walt and Semie Moseley.

In 2018, Ted Smith posted a video on Youtube explaining how to convert a 10 string Melobar to a 6 string and telling part of the story between Melobar and Mosrite.

Do you have a classic/collectible/vintage guitar with an interesting personal history that could go well with Classics? If so, email ward@vintageguitar.com for details on how it might be featured.

This article originally appeared in the February 2022 issue of VG. All copyrights belong to the author and Vintage Guitar magazine. Unauthorized duplication or use is strictly prohibited.